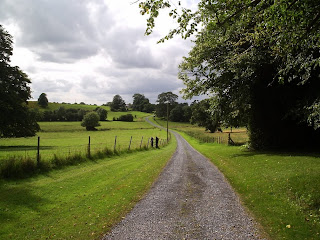 Tina looked at the address on the mailbox and pulled up the long driveway.  A screen door opened and a silver haired woman waved and hollered, “I’m Betty..You need any help with your things?” Tina pointed to the back of the beat up old van and said, “Everything I own is back there in big plastic bags.” The woman disappeared for a moment and then reappeared with another much younger woman wearing overalls covered in paint.


The two women carried Tina’s bags into the house while Tina gently lifted her daughter off the back seat. ” Sorry to wake you buttercup, but we’re at our new house.”The little girl yawned and smiled at her Mother.”Will folks be nice here, Mama?” she asked. Tina kissed her daughter on the cheek and said, “I’ll bet they’re going to be the nicest folks we’ve ever known.”
That night, Tina sat in the worn but comfortable living room with seven other women as they shared stories about their lives.The warmth from the fireplace felt good and for the first time in months, her stomach wasn’t in knots. Tina’s mind drifted off for just a moment to the scene that took place before she left the motel.
“You’re a pathetic loser” Brian screamed at her. “Look at you…You became fat and ugly after you had the baby. It’s your fault that I had to find another woman.” He looked at Tina and started to laugh.” Did you think I tracked you down to ask you and the kid to come back? I’m glad you left me!” Tina stood there silent and watched as Brian got in his pick up truck and drove off. The couple in the next room opened their door, stared at the young woman and quickly closed their door. Tina went back in the room, pulled out the phone book and looked up the number for the local women’s shelter.
Betty came outside and sat on the rocking chair next to Tina. “The first few days are always the worst” she said. “You’ve got it better than a lot of these girls. At least your man isn’t going to come looking for you!” Tina looked at the woman sadly.”He’s moved on to the next one” she said. She paused for a moment as if finding it painful to continue…” My parents were killed in a car accident and I had no-one. I met Brian at work and he acted like he cared about me, until I realized all he wanted was the $25,000 my parent’s life insurance paid.”
“Why didn’t you leave ?” Betty looked at the young woman questioningly. Tina took a deep breath and answered, “I found out I was pregnant and I wanted my child to have a Daddy…I wanted her to have a family like I used to have. In the three years that followed, Brian slowly took all my money, telling me he was investing it for our future.” The young woman looked at Betty. ” I always felt like Brian was hiding things but I couldn’t prove it. One day I came home early from work and saw a woman leaving our apartment with him. I went in the house, packed my things, picked up my daughter from the babysitter and left.”
Betty looked at the young woman’s face and knew the conversation was over. ” It’s getting chilly out here” the older woman said.” We can talk more in the morning after breakfast. Go ahead in…I’ll be right in.”
Tina walked in the house and Betty watched as the young woman disappeared down the hallway. Betty took out a tissue from her pocket and wiped the tears from her eyes. Fifteen years of working with these girls and it never stopped hurting.
“Damn you Ray” she whispered under her breath .”Damn you!”
Read more @ DebiDrecksler.com!