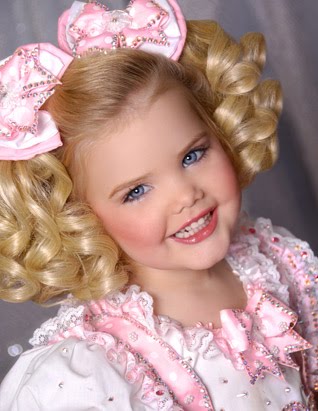 There was a story in the news about a six year old girl retiring from the pageant circuit. Her Mother, also her manager, has much bigger show business plans for her young daughter. 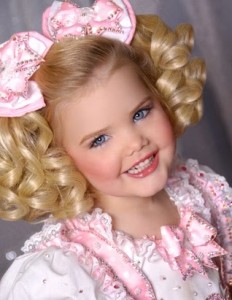 The reaction from the public is disgust with this Mother for what she is putting her child through. She is being accused of robbing her little girl of her childhood. People don’t like the little girl’s make-up, suggestive dance moves and overall appearance. Many say that this Mother is living through her child.

I see examples of parents living vicariously through their children every day.

What about the toddler who is enrolled in an exclusive preschool so that he or she can be programmed for success. The child already has his or her entire educational life mapped out including the most prestigious private schools, tutors, after school activities etc…Every minute of every day is structured and planned. There is NO time allocated for just being a kid. Daddy and Mommy want to say one day, “My child is an honor student at one of the top colleges in the nation.”

What about the child whose Daddy never made it to the Big Leagues and puts his young son into sports, sports and more sports…pushing and pushing and pushing…never allowing the child to have a choice as to whether or not he wants to play that sport. Daddy is at every game cheering on top of his lungs or making faces when his child doesn’t live up to his expectations. Or maybe it’s the Mother who didn’t make it as a ballerina pushing her daughter to dance, dance, dance, when maybe the little girl would rather play hopscotch or on the swing set in the backyard.

I think this story is all about a Mother, who wants to see her dreams become a reality through her child. She isn’t worried about any negative effects from what she is doing. In her eyes, she is giving her daughter an opportunity to be a star!

What are your thoughts?