Ask Yourselfâ€¦What Reflection Do I See Looking Back at Me? 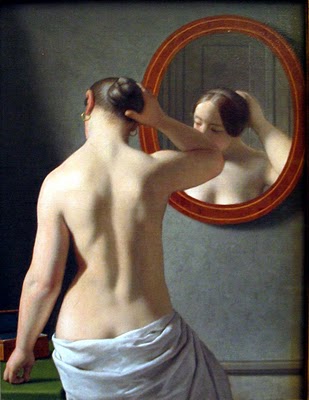 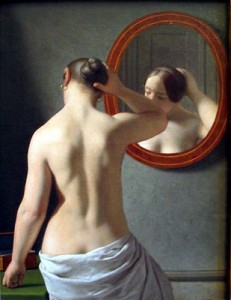 I’ve been reading a lot of blogs written by women, who as they hit middle age and older, become dissatisfied with their physical appearance. What they see when they look in the mirror is not what others are seeing…it is their critical perception of the reflection staring back at them.

I am comfortable with the reflection of the smiling 60 year old face staring back at me in the mirror. I feel no need to erase a few years with Botox injections or plastic surgery.  I think older women are beautiful.

However, I have dealt with a few perception issues of a different nature.

During my fourth pregnancy (26 years ago) I developed a lump on the left side of my neck. It is non cancerous. Several doctors through the years have agreed that to surgically remove it could result in nerve damage. I spent years hiding the lump under my long hair until one day I just couldn’t take it anymore. It was the middle of the summer and around 90 degrees. I pulled my long hair back into a ponytail. I’ve been doing that very often since that day. Do people notice the  lump? I am sure some do. Do they ask about it? Only concerned hairdressers and doctors, if I forget to mention it to them. I have chosen to no longer see that lump when I look in the mirror.

Like my Grandpa Herman, I have a genetic tendency toward developing lots of spider veins. (Yes…men get them, too.) After four pregnancies my legs look like they were tattooed with an intricate design. Do people look at my legs?  Sometimes. I haven’t worn a pair of shorts in many years. A few decades ago, a doctor convinced me to let him remove all my spider veins. He said that he could help me look more attractive. He explained that he would inject my legs with a saline solution over a series of sessions ( enough for him to build an addition on his house) and then prescribe special stockings for me to wear temporarily. He told me that the results might only last a year or they could last longer. No guarantees.When I asked about possible risks, he laughed at my question and said, “I’ve never lost a patient!” I had a terrible nightmare the night before my first session. (For those of you who don’t know..I am very psychic.) Early the next morning, I received a phone call from one of the nurses at the doctor’s office. I will never forget her words. She said, ” Doctor —- is out sick today.” She continued on. “It is so strange because he NEVER gets sick!” Then she said, “I’ll be happy to reschedule you for a later date.”  I told her thank-you but I would not be rescheduling.

Recently, I was introduced to one of my husband’s clients. He is smart, interesting and is engaged to a beautiful woman. He has an artificial leg. He hasn’t allowed that loss of a leg to define him as unattractive. He lives life to the fullest even though his future may include the amputation of part of the other leg.

And by the way…He wears shorts!