Every Girl Should Have A Big Brother

Blanche Barnett Nevel, gave birth in 1949 to an adorable blond haired boy,who twenty-one months later, became a big brother to a cute little redheaded sister. With dark  brown hair and a natural tan from spending time outdoors, our Mother was often stopped and asked, “Are you the Nanny of these 2 babies?” (Three more children of assorted hair colors were born a few years later but that’s another chapter to this story.)

When my big brother and I were little, we were inseparable. We started our school career at Tiny Tot Finishing School. One day a big 5 year old bully pushed my brother down on the playground. I became so angry, I filled my purse with rocks and hit the bully with it. (At 3 I carried my purse with me everywhere. I was such a girly-girl!) I remember this incident like it was yesterday though I doubt my brother does since it happened 59 years ago! He returned the favor when I pooped in my pants . All the kids would have made fun of me if they didn’t see my big brother standing  there watching. I am SURE he has erased that memory from his mind!

My big brother and I shared a bedroom when we were little and we got into lots of mischief. For one of my birthdays, he bought me a small flashlight. The night before my birthday, he carefully unwrapped it and we played with it under the covers for hours. The next morning, my Mother couldn’t understand how the brand new flashlight batteries went dead!

During hurricane Donna in 1960, (also our younger sister’s name) my big brother convinced his siblings to put books in our pants so that if we got spanked for behaving like wild animals during the hurricane, it wouldn’t hurt a bit. Our Father (who wasn’t big on spanking) discovered the books and fortunately didn’t get mad. Somehow my big brother always charmed his way out of punishments!

I went through an awkward stage as a preteen but my big brother never did. With his self confidence and good looks, a lot of my girlfriends had crushes on him. I remember in junior high all my friends wanted to sleep over so they could hang out with my brother. It took me a while to figure out that I hadn’t suddenly become Miss Popularity.

When I was 15, our family moved to Miami Beach. I will always be grateful to my big brother for making the transition so easy for me. He had attended school on Miami Beach the year before and made sure I met all his friends. They quickly became mine, too!

My first semester of college was lonely for me. I was far away from home and my brother’s letters kept me happy and motivated. When I transferred to a local college, it was my big brother who helped me write an English paper that earned me an A++.  When he saw my grade and the teacher’s positive remarks, he said to me, “You’re on your own now, kiddo! Happy writing!”  I was determined to show him that I could become a great writer like him!

Flash forward 44 years and though my big brother and I live hundreds of miles from each other, I’m still loving and appreciating  his role in my life. He has all the best qualities of our beloved Mother and Father. He’s a loving, caring person who looks at life as a half filled glass. He has a wonderful sense of humor that is the glue that holds us together. The other day I told him that when we’re in our 90’s, we’ll sit on our rockers with a view of the ocean and share jokes.

* Note from Debi…Big brother does have a name but I am protecting his privacy in case any of my junior high school girlfriends are single and looking for a good man.  He is happily married! 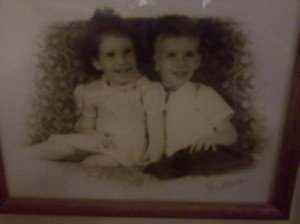