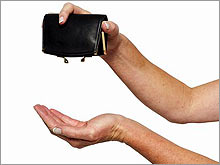 It’s a challenging job market especially when you live in an area where most of the employers refuse to pay livable wages. People are angry…

Read this person’s reply to an ad posted on craigslist

“have u lost ur mind or is everyone not willing to pay a decent salary… 550 dollars a month is below minimum wage and if ur such a great businessman u should be able to afford a respectable salary!…ur a joke!”


I look at the jobs advertised on craigslist every day.

One day I saw an ad for an evening hostess in a nice restaurant. Since I work from a home office all day, I thought that it would be an interesting way to meet new people and earn extra income. The ad advertised that the salary (8-12 per hour) would be based on the qualifications of the applicant. At my interview,  the manager told me that he loved everything about me and with my professional background, I was exactly what he was looking for! I said, “Great, when do I start?” He informed me that I had to return for a second interview with the boss. I knew for a fact that the boss was in the back. When I questioned the manager about this, he said that the boss was too busy to come out. (I was told to come mid afternoon when business was slow.) When I got back to my office, I emailed the “boss” and asked her what my starting salary would be if I was hired for this position. She wrote back that everyone started at minimum wage. I reminded her what she had posted on her craigslist ad. She said that she never posted anything about salary. Since I had copied and pasted the ad, I read it to her. Once again, she said that she never posted a salary. I told her that she could keep the job!

End of story…The ad disappeared from craigslist shortly after our conversation!

This was an ad posted under Resume on craigslist

“Looking fo work immediatly, mowing lawns painting ETC have a loan payment due by the 24th of 95 dollars… trying to work to get it, i only get paid monthly so im in a bind


I’m thinking of offering a free class to teach folks looking for work how to write an ad that will catch the attention of prospective employers. First thing on the list…Learn how to use spell check!