The amount of advertisements during the holidays never ceases to amaze me. The average consumer is  barraged with sales and promotions. Newspapers,mailbox, internet…You can’t avoid them.

One ad from a clothing business, sent to me online, just caught my eye. It read, Buy One, Gift One. Reading it quickly, my eyes saw, Buy One, Get One. Of course, I was disappointed when I realized what it actually said. (Buy one, get one 50% off.) But here’s the thing…The company most likely gambled on the fact that many consumers, (not just Debi Drecksler) would be reading SO quickly, they would see what they wanted to see. I think this is an interesting ( if not a sneaky) way of getting consumers to a site. 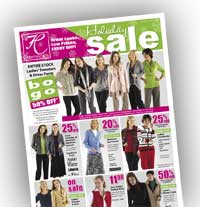 Once the consumer clicks on the site, they are hoping that at least some of them will stay and shop.
Instead of being mad at the company…the consumer will wonder if it’s time to have their eyes checked.

Now, listen up all you marketing majors with your fancy degrees… A REALLY ingenious company running an ad like that would have had a link directly to an eyeglass site!

What does this prove?

This old timer is one step ahead of you!