My conversation with Joan Rivers

It has taken me almost 5 years to write this story about my conversation with Joan Rivers. Every time I started to write the story, I felt overwhelmingly sad.

Joan Rivers died unexpectedly on September 4th, 2014 from complications during surgery. I was heartbroken, along with millions of her fans around the world.

My admiration for Joan Rivers goes back several decades. In the late 1980’s, Joan Rivers had a popular talk show. She brought laughter in my life at a time at a time when I was watching my Mother fade away from a debilitating  disease. I felt drawn to this Jewish Mother/comedian who found humor in everyday life.

One day, over 4 years ago, I had this overwhelming urge to write to Joan Rivers on Messenger.

“Many years ago when my Mother was dying and I had 4 young children to care for, it was YOU who got me through the worst of it with your wonderful humor. I remember writing you a “love” letter (before the internet) hoping it would get to you.Thank you for bringing so much sunshine into my life.”

I was so happy when hours later, I received this reply.

“Thank you, darling Debi! A pleasure and privilege!”

Less than 2 months later, Joan Rivers passed away. It was a tremendous loss to the world of comedy and to those, like me, whose lives she touched. 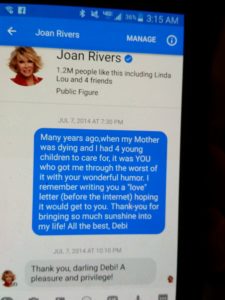