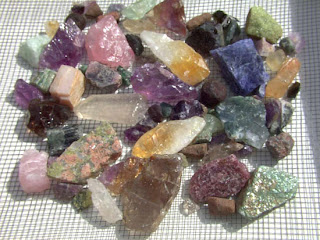 A Mother and her two little boys are passing through a small mountain town in North Carolina and see a sign for gem mining.

The Mother knows that the kids are tired from being cooped up in the car all morning. It would be another hour before they arrived at their Grandparent’s house. Even she could use a break before all the questions started. The only thing she had told her parents was that her husband had abandoned the family and filed for divorce. She left out other details like how he had drained out their bank account and moved in with his young girlfriend….She was too exhausted to hear,”We told you not marry him!”

Impulsively she gets off the highway and pulls into the parking lot. The boys start to cheer. “Just a half hour” she said. “We don’t have a lot of time!”

Within minutes the Mother and her sons are sitting on hard benches digging through buckets filled with dirt. “Not such a great idea” the Mother thinks as she watches her boys start to sweat from the afternoon heat. Suddenly the oldest boy lets out a holler. “I found something” he says, as he digs out a dirt covered stone from the bucket. The attendant comes over and shows the boy how to place it in the screen that is provided and wash off the dirt in the flume. The stone is very small and lusterless and the boy looks disappointed. The Mother tells her son to put it back if he doesn’t want it.

A man sitting next to them interrupts…”Please don’t do that” he says. “If you don’t want the stone, I’ll be happy to take it. I bring my daughter mining all the time and we’ve collected lots of small stones.” He smiles at the Mother, ” Sometimes it’s the little treasures that mean the most. If I only cared about the big stone worth millions of dollars, I’d be missing out on some of my wonderful moments with my daughter. My wife died three years ago and I thought my world had ended. Then I started coming here with my daughter just to watch her excitement every time she finds a stone.” He grows silent for a moment. “I’m sorry, I didn’t mean to talk your ear off!”

The Mother looks at the man and notices that his eyes are the color of the ocean on a crystal clear day. She remembers how much she loves the ocean.

“Would you and your daughter like to have lunch with us?” she asks.” I have a cooler filled with sandwiches. It would be no problem to share!”

The man accepts the invitation.

The Mother calls her parents to inform them that her arrival will be delayed…She tells them that she decided to take a detour down a beautiful country road.