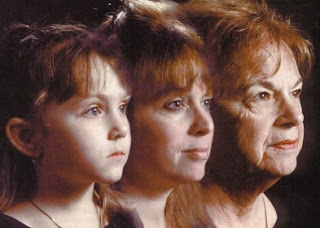 How many of you young people work with a woman of my generation? Perhaps the woman has been  part of the company since you were just a kid or maybe even before you were born. Rumor has it, the company is being downsized and the older generation will be the first to go. “Why not?” you rationalize to yourself. “They make SO much more money then the rest of us and the company has to cut corners. As long as it is not me…who cares?”

Inside your head (though you don’t share these thoughts) you admire and respect the women who paved the way for the job you now hold. You realize that forty years ago, women had less chance of being hired unless they were willing to work their rear ends off and make huge sacrifices.You know that the nice big handbook on your desk with all the employee benefits didn’t write itself.You wouldn’t have taken the job if those benefits didn’t exist.

You think about your student loans, the new car you just purchased, the trip you want to take on your generous vacation time. You avoid getting into conversation with that older employee who is sitting at a table (alone) in the employee’s break room. You’d rather text your friends while you eat.

An older woman loses her job and one of the employees in your office (maybe even you) gets a promotion and life goes on..
.
A sixty something woman speaks out (anonymously)

I’ve just spent the last six months sending my resumes to hundreds of  businesses and only a few have even bothered replying. What happened to manners? When I managed to land an interview, I was treated like a relic from the past. I refused to play down my credentials so that I didn’t intimidate the person doing the interviewing. Of course, it is illegal to ask me how old I am, but my age is etched on my face…and I wasn’t about to  apologize for that. The young man interviewing me, never smiled once. There was no connection…none at all. He had made up his mind about me as soon as I walked though the door. To him, I was invisible.