When I moved to the mountains of Western North Carolina twenty four years ago, I was surprised at how polite the drivers were. Having lived in South Florida most of my life, I was conditioned to irate drivers and lots of honking.

In the early years of living here, it was not unusual to see a car pull up to a stop sign…watch the driver roll down the window, stick their head out and carry on a conversation with the driver behind them. If you were the third car in line, you knew better then to honk. That was considered SO rude. The driver of car #1 could be asking something important like, “I didn’t see your Granny in church this past Sunday. I hope she’s recuperating well from her broken hip.”

The driver of car # 2 might reply, “Oh, she’s doing great, but Uncle Leroy stopped by with his new wife and Grandma whipped up the best biscuits and ended up going to the later service.”

I used to take that time to work on my grocery list or sort through my coupons or maybe see who was in the car behind me. It might have been one of my neighbors.

Times have changed. This area has tripled in size and along with all those drivers came short tempers and some really bad driving. In the past week, my husband and I were lucky (thanks to his quick reflexes) to avoid a head on collision with a  truck whose driver wasn’t watching the road. We also witnessed a car being hit because the driver behind him was talking on his cell phone and not paying attention.

Yesterday, a driver of a car was in a very big hurry and blocked the entire intersection so that none of the vehicles could make a left turn. I was the passenger in my husband’s cargo van. I leaned over, shrugged my shoulders, put out my hands and gave the man my friendliest,  “What’s your hurry?” look.

He gave me his nastiest ” – – – – you” look and stuck out his middle finger! His scrunched up, mean face could have scared the diaper off a baby!

Now back in the old days, that kind of behavior would have been frowned upon and may have even resulted in a few hours in the County jail. You never know… The lady you shot the finger at could have been the favorite niece of the local sheriff. 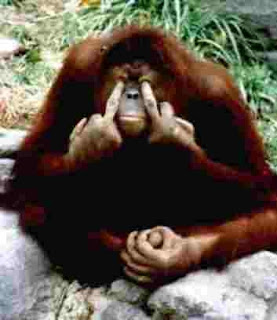