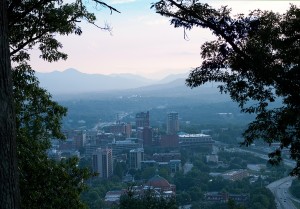 I took a walk in downtown Asheville this afternoon. I don’t get out of the home/office much and this was a well needed change of scenery for me. It was cold and windy… more conducive to walking quickly rather than taking a leisurely stroll.

I visited several art galleries and admired their most recent work. I stopped and asked a price on a thin beaded bracelet displayed on a table outside the Grove Arcade. The young woman said ” One hundred and twenty dollars”…. I made her repeat it because I thought I hadn’t heard her right. I assumed it was going to be around twenty-five dollars. I let the young woman know that I wasn’t a tourist and then was aggravated with myself for insinuating that we rip off tourists in Asheville. I’ve lived in Western North Carolina 24 years but do not have a southern accent, which makes it easy to assume I’m from somewhere else. (Later that afternoon, I saw similar hand made bracelets for $30 in two of the local art galleries.)

I wasn’t picking up the greatest vibes anywhere and was disappointed in the lack of smiles and greetings from sales staff in the places I stopped. If I were a tourist, I would not have gotten the best impression of our downtown. I’m extremely loyal to our downtown and want to see it continue to succeed. However without great customer service, there is a good chance people (especially tourists) will go elsewhere.

Before I left, I stopped in to see my buddy Scott at Sister McMullen’s Cupcake Corner. I picked up a few black and white cookies to munch on later. He was as friendly and upbeat as ever.