On this particular morning they are talking about the senate race between Connecticut attorney general Richard Blumenthal and millionaire entrepreneur, Linda McMahon. 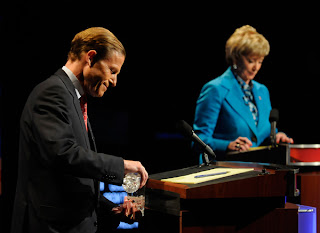 After listening to both sides, here are my thoughts.

I would rather vote for a woman who doesn’t hide what she is, who she is and how she made her money then vote for a man who slipped in a whopper of a lie so that folks would vote for him. Maybe it’s the generation I grew up in…I lost friends and classmates in Vietnam and that’s a tragedy in itself! So if I’m listening to an ad where a man who is already attorney general of a state tells me that he served in this horrific war, and then I am told that it is a lie…Sorry buddy, you’ve lost my vote and more importantly …my respect!

Don’t you think it’s about time we started giving a lot more than a slap on the hand to politicians who lie? We don’t tolerate lies from our children yet we look the other way when a college educated adult serving in a political office looks the American public in the eye and tells a lie!

There is something very wrong with this picture!