The Naked Lady In The Painting Is NOT Debi! 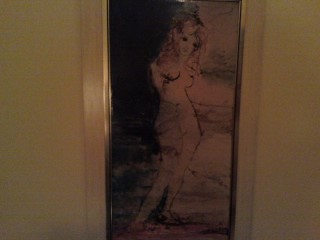 As my readers will remember, I recently had my defective shower replaced…a week long job that I would like to erase from my memory. During that week, I had many workers walking into my bedroom to get to the bathroom. I had moved any furniture in their path and any artwork that could possibly get knocked off the walls. I tried very hard to stay out of the way and thought I was being very inconspicuous.

After the job was done, I suddenly realized that …horror of horrors…the one thing I should have removed from my bedroom was the painting hanging over my dresser. I hadn’t thought of removing it because it wasn’t in anyone’s way. It was a huge painting of a nude redhead. It was given to me many years ago by a family member who had just gone through a divorce and didn’t want the painting anymore. Of course, I accepted the painting! Back then, the only artwork my husband and I could afford were reproductions. That painting moved with us from home to home and always hung in our bedroom away from the public eye.

My husband used to tease me that the woman resembled me with her curvy body and wavy auburn hair. I would give him one of those, Never in a million years would I pose naked looks and he would start laughing and walk away. (All 4 children knew that the woman was NOT their Mother.) 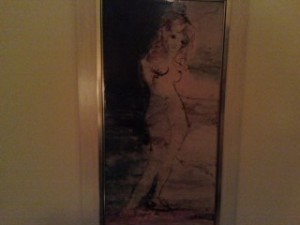 So imagine what went through my head when I suddenly realized that an entire group of  male workers viewed that painting dozens of times as they walked in and out of my bedroom. (One young man made about a hundred trips bringing in pieces of tile.)

To make matters worse, I live in a complex which will be under construction for several years to come. I will have to see these workers as I take walks or ride my bicycle. Most of them speak Spanish.

I hope as I quickly pass by (fully clothed from neck to ankle) they won’t  give me a look of recognition and say, ” hola..mujer desnuda!”